By Dimitris Mouroulis on March 30, 2018 in Past events 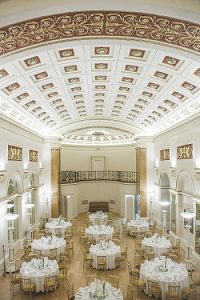 The HMS UK annual dinner took place at The Ballroom of The Lansdowne Club in Mayfair, London, which is a Grade II listed 18th century room with spectacular features, that was originally designed by the neoclassical architect Robert Adam and later remodeled by George Dance and Robert Smirke to house the renowned classical statuary Lansdowne Collection.

The evening started at 18.30 with welcome drinks, followed by a live Performance by the Violin Soloist Miho Hakamata and the welcome speech from the HMS UK President, Dr Miltiadis Krokidis.

A three-course meal was then served with:

The dinner was followed by a majestic after dinner speech from Prof. Thanasis Fokas, Professor of Applied Mathematics at the University of Cambridge and Member of the Academy of Athens on “Giacometi and Perception”

Charity raffle of a number of presents followed.

The dinner was attended by 82 guests including HE The Ambassador of Greece, Mr Dimitris Caramitsos-Tziras  and his wife Mrs Margarita Mavromichalis, HE The High Commissioner of Cyprus, Mr Euripides Evriviades, the representative of HE Archbishop Gregorios of Thyateira and Great Britain, Mr Athanasios Rizos, Head of the consular section of the Embassy of Greece in London, Prof Thanasis Fokas and his wife Dr Regina Karousou-Fokas and daughter Mrs Anastasia Fokas, Mr Labis and Mrs Sophia Tsirigotakis, Mr Sotirios Hassiotis, Mrs Anna Dempster Head of the Academic Program at the Royal Academy of Arts and her Husband Mr Michael Villaverde and Prof Adam Hatzidakis from the University of Crete and his wife Mrs Alberta Lazaridou.

After dinner party with the Hellenic Bankers Association UK followed at the Bulgari Hotel after 23.00.