By Dimitris Mouroulis on November 24, 2014 in Past events 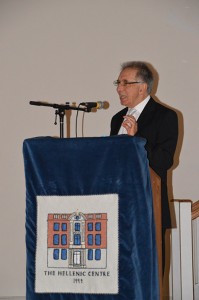 University of Cambridge and Academy of Athens

“The importance of unconscious processes”

Friday 7 November 2014, Hellenic Centre.
Time: 7 for 7.30pm. The event was open to all, and a drinks reception followed.

A.S. Fokas has a BSc in Aeronautics from Imperial College (1975), a PhD in Applied Mathematics from the California Institute of Technology (1979) and an MD from the University of Miami, School of Medicine (1986). In 1986, at the age of 33, he was appointed Professor and Chairman of the Department of Mathematics and Computer Science of Clarkson University, USA. In 1996 he was appointed to a Chair in Applied Mathematics at Imperial College, UK. In 2002 he was appointed to the newly inaugurated Chair in Nonlinear Mathematical Science at the University of Cambridge, UK. In 2000 he was awarded the Naylor Prize, which is the most prestigious Prize in Applied Mathematics and Theoretical Physics in UK (the last five earlier recipients were Sir Roger Penrose, Sir Michael Berry, Sir John Ball, F.P. Kelly and S.W. Hawking). He has also been awarded the Aristeion Prize in Sciences of the Academy of Athens (this is the most prestigious Prize of the Academy given every four years to a single scholar of Greek origin chosen from science, engineering, or medicine), as well as the Excellence Prize of the Bodossaki Foundation (this premier scientific Prize is awarded every two years to scientists of Greek origin, as chosen by an international committee chaired by a Nobel Laureate). He has received honourary degrees from six Universities and also has been decorated as the Commander of the Order of Phoenix by the President of the Hellenic Republic. In 2009 he was selected as a Guggenheim Fellow on the basis “of stellar achievement and exceptional promise for continued accomplishment”. He is the first ever Applied Mathematician to be elected a full member to the Academy of Athens. He is a Professorial Fellow at Clare Hall, Cambridge. He is the author or co-author of three monographs and of more than 250 papers, as well as the co-editor of seven books. ISI Web of Science includes A.S. Fokas in the list of the most highly cited researchers in the field of Mathematics.